2003 Subaru Forester XS – Another Star From The Subaru Cluster

The 2003 Forester XS is worth every penny that you would invest in a car, or is it an SUV. It is definitely a Crossover Vehicle Canadians recognize as perfect for Canadian driving.
Since 1976 Subaru Canada has been selling sensible, reliable mobility in the form of intelligent, efficient and innovative automobiles. In 1998 Subaru introduced the Forester, a style of vehicle that revolutionized the Compact SUV class of vehicles. The Forester was quickly noticed by the consumer, and six years later, Subaru Canada reports that they continue to break records in sales. It was the best November in history with a total of 1620 vehicles sold. Sales were led by the new Forester, up 16.5% compared to the same month last year. Indeed the Forester has been making its mark as the alternative to the cumbersome, less efficient SUV in the eyes of Canadians!

To discover the origin of Subaru, look to the stars. Because this car company has an interesting history that began long before it was ever a car company. The word “Subaru” dates back to early eighteenth century Japan and it means ‘to come together and unite.’ The six star cluster in the Subaru logo relates to the fact that Subaru is also the Japanese name for “Pleiades, an actual celestial cluster found in the Taurus constellation identified by six stars.

First glance at the exterior, and right away you can see the changes making the Forester more SUV than station wagon. The 2003 boasts a sleeker headlight/turn signal assembly covered in clear plastic that slopes toward the larger grill. The front bumper has also been redesigned and houses the round halogen fog lamps that look pure off-road. A combination of the headlights, the bumper, and the aluminum alloy hood makes the 2003 ten percent more drag efficient than the 2002, which means less wind noise and better fuel economy. Like the hood, the roof rails and the bumper beams are all made from lightweight aluminum reducing the overall vehicle weight by 90 pounds (45kg).

Adding to the more adventurous look of the new Forester are front and rear fender flares which are more eye-catching and less block-like. The rear of the vehicle completes the new look with a couple of clean one-piece triangular tail lights and a concave hatch that clearly supports the word “SUBARU” just under the rear windshield wiper. 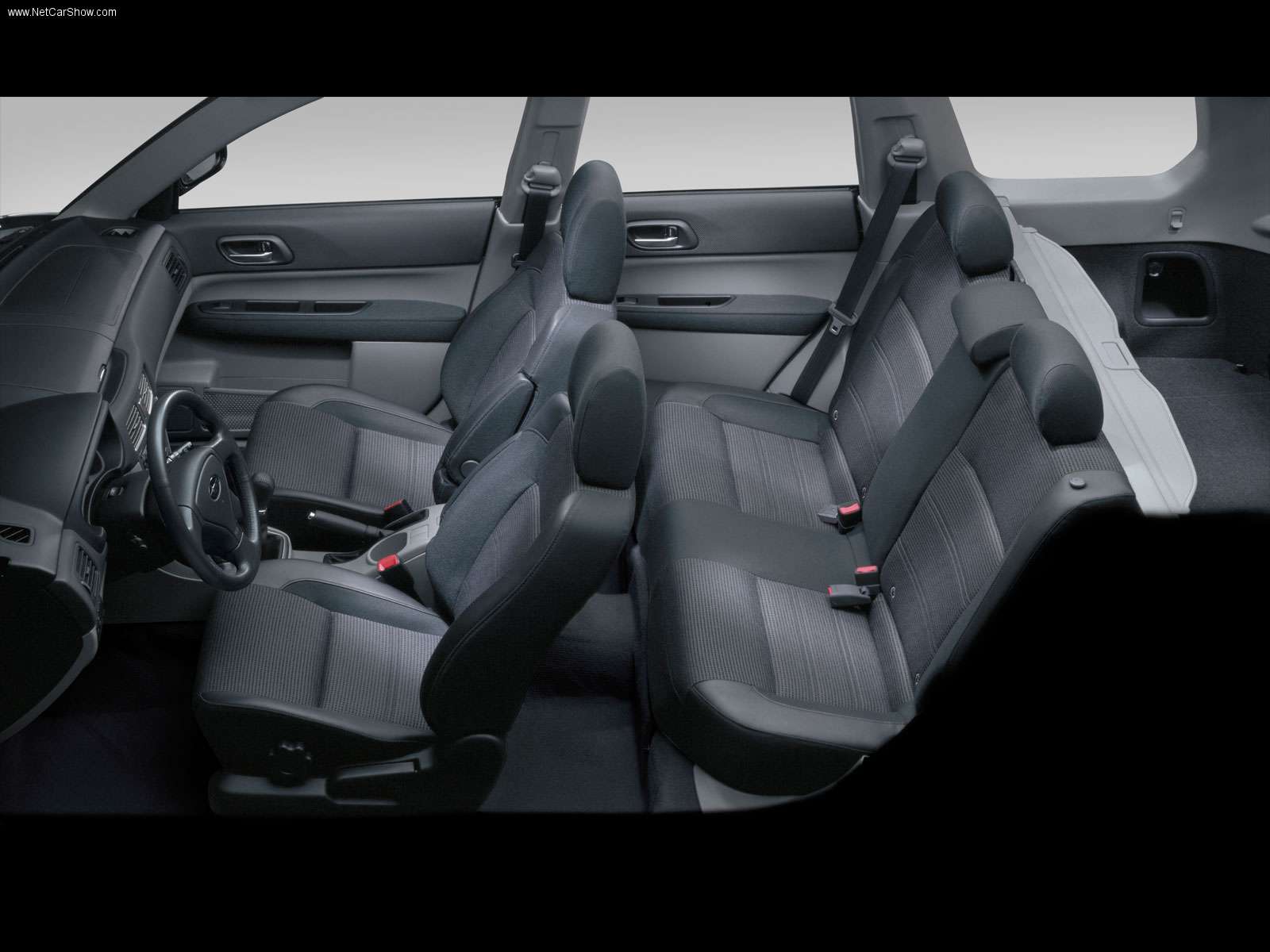 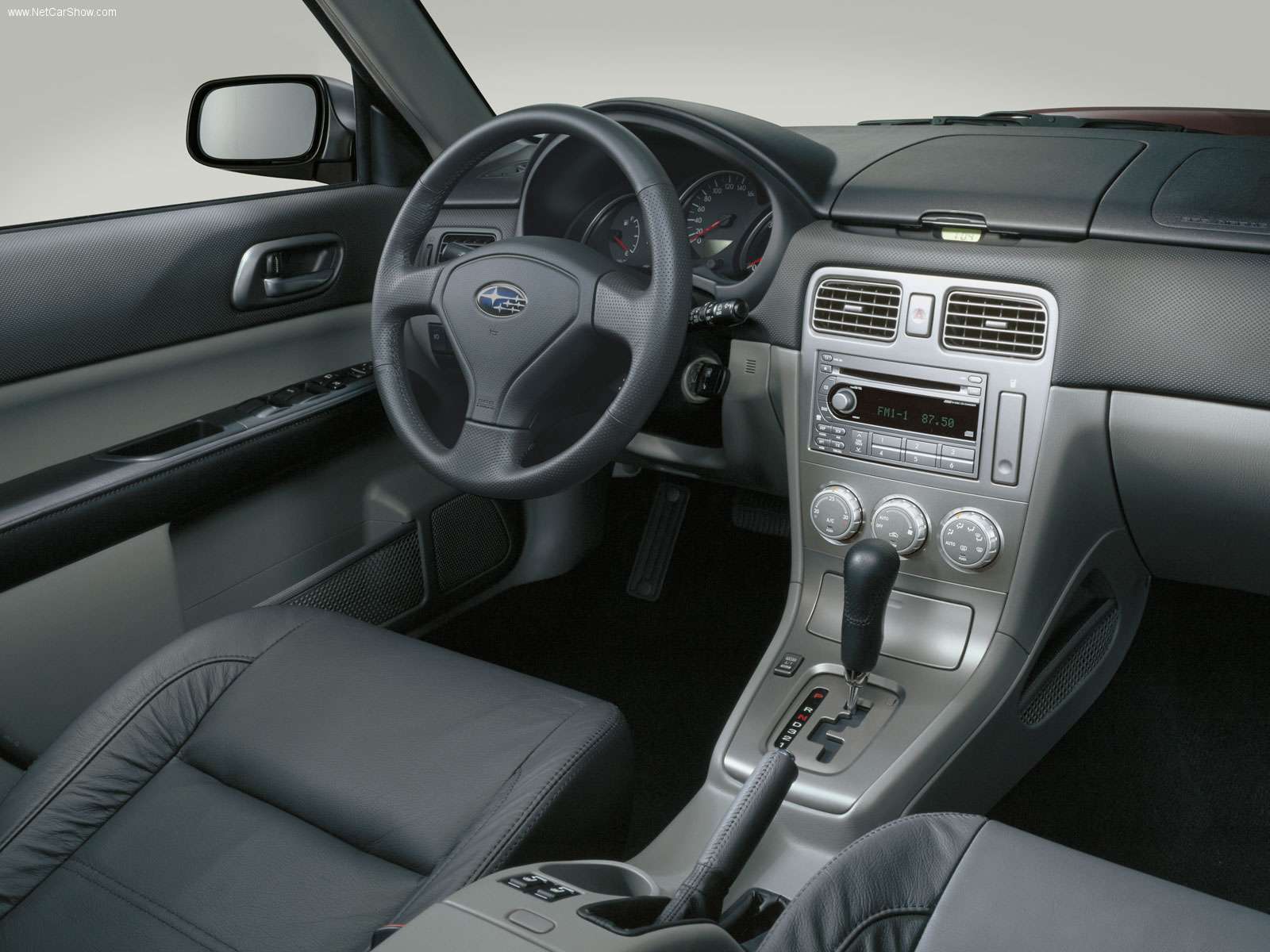 Although the wheelbase is unchanged for 2003, the front and rear legroom have increased fractionally while headroom decreased slightly. The look and feel of the interior exude quality. Perforated “leather look” plastic covers the dash and door trim reducing glare and adding an upscale appearance. The steering wheel, shifter, and handbrake were all wrapped in black leather, and most of the plastic on the center console around the gated shifter and the radio was made to look like anodized aluminum. The instrument panel is borrowed from the Impreza line with a little sportier trim. I liked it because it reminded me of motorcycle-style pods with a large speedometer and tach on the right, and fuel and temperature to the left.

Perhaps the thing that I liked most about getting in and out of the Forester was the height of the seat. At 6 foot 1 inch, I had developed a “fall in and roll out” style of entering and exiting with most cars. A combination of the 190 mm (7.5-in) road clearance, the seat height, and the door opening made getting into the Forester easy, more like sitting on a chair. I generally like to sit a little low when inside so that my head is not touching the roof, but even sitting at the lowest setting, I still felt like I was driving a taller SUV. If you are more on the petite side don’t worry, with a twist of a knob on the side of the seat you’ll be raised up till your head is almost sticking out of the over-sized sunroof. Tall or petite the Forester feels big on the inside.

To gauge the comfort of the interior we used the Forester for a three-hour drive to get us to The Rally of the Tall Pines in Bancroft, Ontario. (If there has been an auto competition that Subaru has dominated with their presence, it’s in the world rally circuit.) The front seats have more aggressive bolstering and better lateral support making the three-hour drive tolerable. Our tester had the premium moquette cloth, which was nice. The legroom in the rear was very tight if the front seats were adjusted all the way to the rear. That could be due to the extra 13.5 mm of adjustable travel. Three adults could fit in the back seats shoulder to shoulder. I wouldn’t want to be sitting in the back with three guys my size on a long drive. However, there is plenty of room and comfort in the back seats for the little people in your family. If you have the need for three baby seats, no problem, you’ll be able to tether them all in with three separate anchors just behind on the roof in the cargo area. “Are we there yet DAD?” I might add that the in-dash 6 disc CD player and 6 speaker sound system with Weather Band came in handy for our day trip. It can also come in handy if you have three baby seats in the back!

No Shortage Of Storage

The front doors have tightly netted map pockets as well as a smaller netted pocket on the side of the console on the passenger side. My wife said that its good to hold a novel that she would read on long drives. If her reading material was too big for that pocket she could always put it in the storage compartment that is integrated into the top center of the dashboard. Very smart!

Despite the zero gain in exterior size, a redesigned cargo area has resulted in nearly 900 liters (32 cubic feet) of usable cargo space with the 60/40 back seats up. When the split back seats are down the cargo space doubles competing with larger SUV’s. Loading cargo through the liftgate is easy, and six-footers need not duck when the liftgate is fully open. 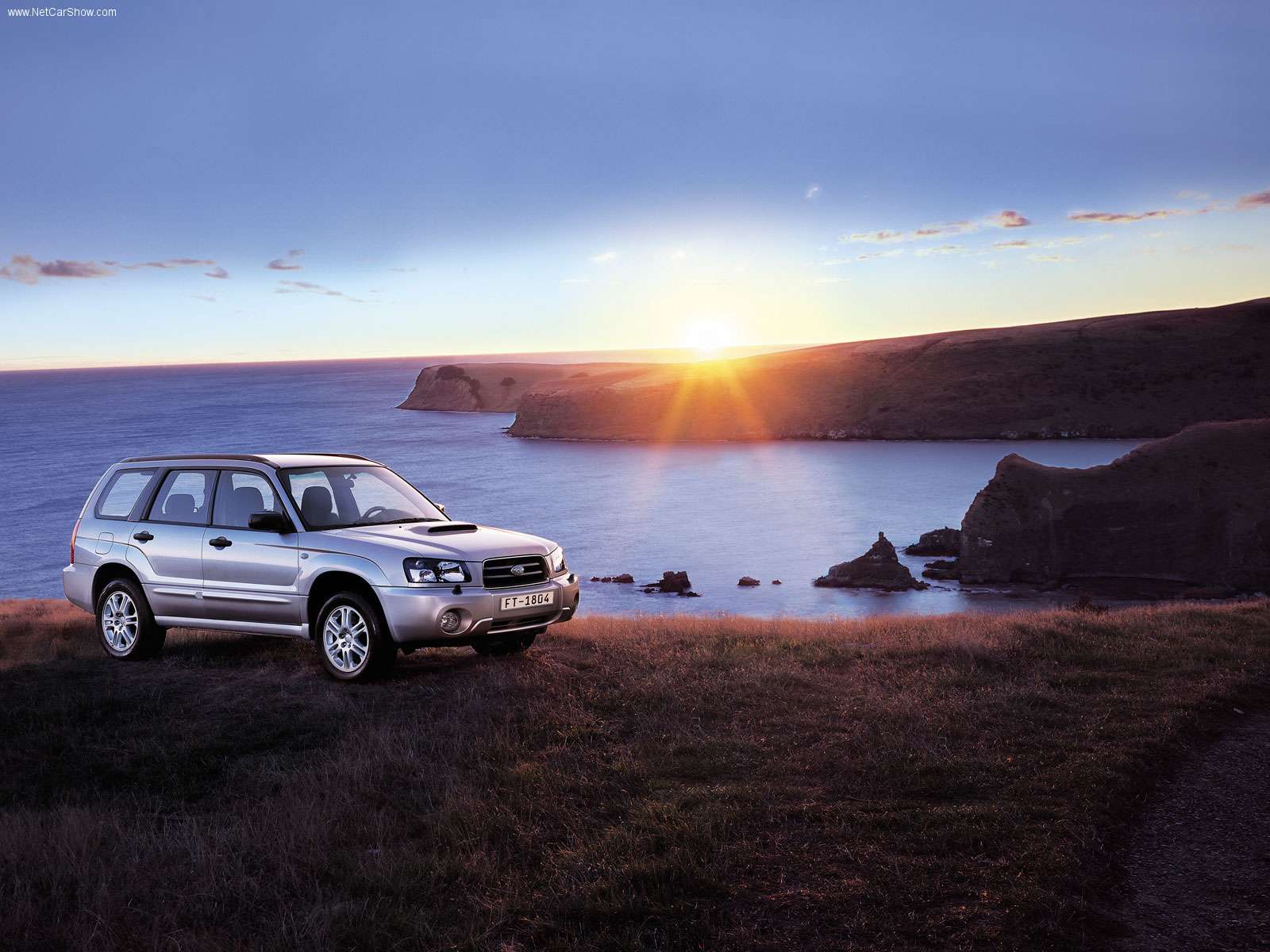 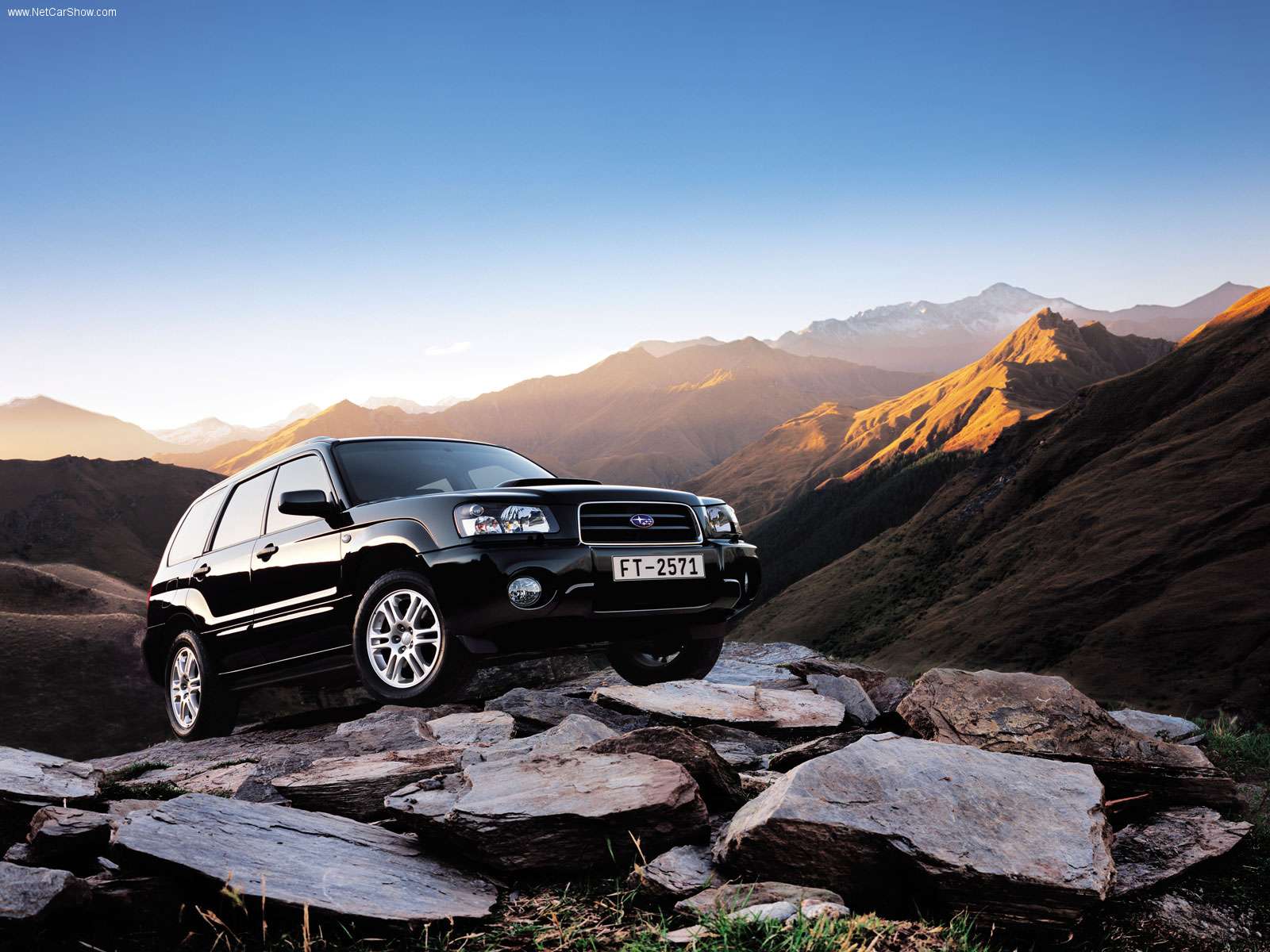 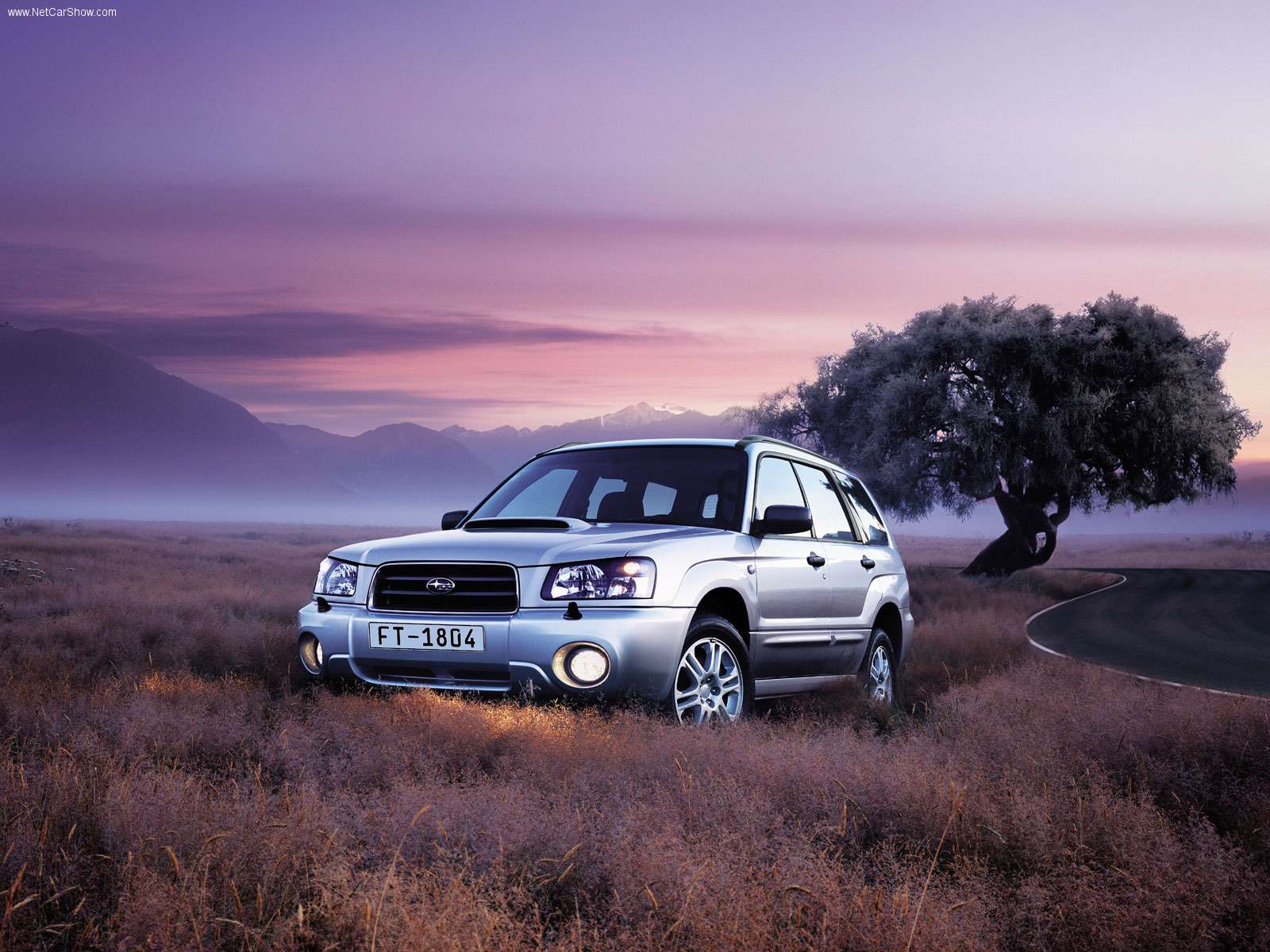 It’s the little things that I love about Subaru, like the windshield wiper de-icer for both front and rear wipers, which are now larger. If you’re Canadian you know what I mean when I say that you’d never have to get out of your car to snap the ice off your frozen wipers. You’d get a clean sweep every time. We noticed that the rear wiper was made large enough so that it cleans as high as the third brake light so that it is visible always. Little things like this make a big difference in the driving experience.

On the drive to the rally in Bancroft, we took all sorts of back roads with the Forester, asphalt, poor asphalt, and gravel. Mother nature made the trip more interesting by throwing in some wet snow and then later freezing it. Naturally, I was confident in these conditions because the Forester shares the same powertrain and many underbody components as the Impreza subcompact cars. The new struts use an internal rebound spring to minimize body roll, and the rear suspension trailing-link angle was changed to reduce drive and stance. This was most noticeable on the twisting back roads of the north, the body roll was slight, and it never felt like it would tip in the faster corners. The Impreza based suspension sure did firm up the handling. Let us not forget that Subaru is a master in the field of All-Wheel drive technology, but as we all should know, All-Wheel drive will get us going, it’s the brakes that help us to stop.

The weather conditions that we were going through made the perfect situation to test the Foresters improved braking ability. At 90 km/h, I pounced on the brake pedal with force so we could experience the standard feature EBD (Electronic Brake Distribution), ABS, and the larger front rotors that were increased from 272 mm (last year) to 290 mm. Straight as an arrow, the Forester went over the patchy ice/snow mixture and stopping in a respectable distance. We noted that the braking noise was quiet and the reverberation of the ABS was hardly felt, which is good because some people panic at the sound and feeling of those elements.

There’s no mistaking the sound and the reliable performance of Subaru’s signature Horizontally-opposed 2.5 liter 4 cylinder engine, or as some call it, “H4”. The 2.5-liter possesses 165 bhp and 166 ft.-lb of torque. This engine builds power smoothly and the 4 speed electronically controlled transmission delivers it to the wheels without a jerk. The engine is unchanged for 2003, and that’s the way we like it. The only way it could get any better is if Subaru gave an optional 3.0L H6 with 212 bhp and 210 ft.-lb of torque, but then why get the Outback. In today’s economy, the 2.5 is just enough, getting 8.1L/100k around town, and an impressive 10.8L/100k on the highway. The numbers get slightly better if you don’t mind the manual transmission. This kind of fuel economy puts the Forester well ahead of the competition. 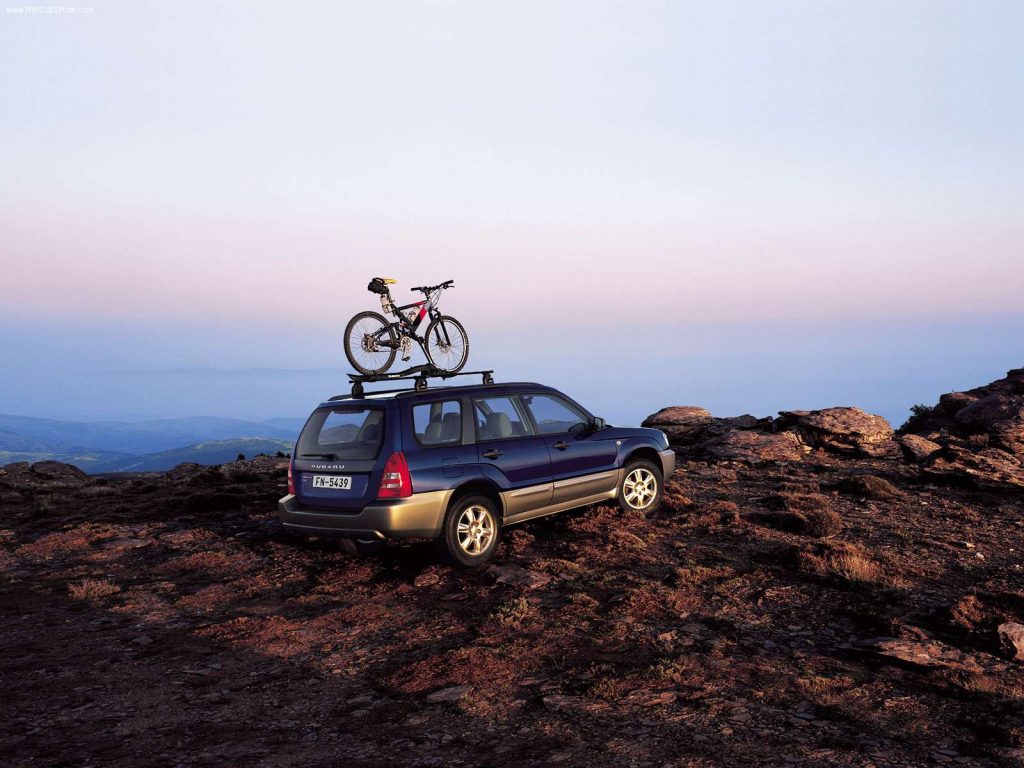 This test drive brought memories about the past when I used to own a 1985 GL wagon. It was the purr of that engine that made me fall in love with that car. So when I was driving the Forester, I thought that I could almost hear that old GL that had over 270,000 kilometers on it and going strong before I handed it over to a friend. That H4 never let me down, so when I say “reliable performance,” I’m speaking from experience. The 2003 Forester XS is worth every penny that you would invest in a car, or is it an SUV. It is definitely a Crossover Vehicle Canadians recognize as perfect for Canadian driving. 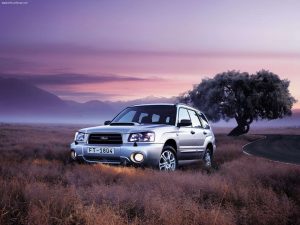