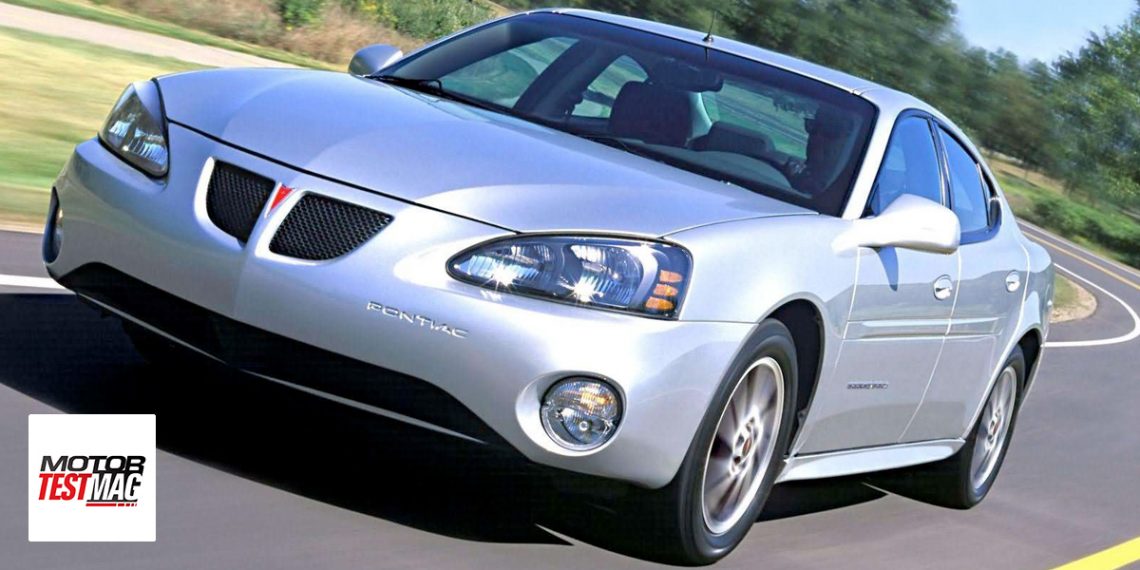 Pontiac Grand Prix and I are old friends. Before purchasing my current vehicle, I drove a 2000 Grand Prix GTP. For three years and some 150,000 km, the Grand Prix and I shared many exhilarating moments together. Although the previous generation Grand Prix was far from perfect, for the money it was the best near-luxury vehicle I could afford. My key complaint about the ‘old’ GTP was the lack of refinement. Most noticeable was the poor ride quality. Expansion joints, road imperfections, secondary roads all sent an unpleasant rough sound through the front end. Numerous inspections revealed no flaws. And of course, the lack of suspension refinement served to over-amplify interior cabin noises from the poorly fit plastics. However, these minor complaints aside… there were plenty of rewards. The GTP was rock-solid reliable. Nothing more than regular maintenance and tires. The first brake job was done at 100,000 km! The engine was simply addictive and remained a strong performer till the day the car was returned.

Enter the redesigned and fresh 2004 Pontiac Grand Prix. I felt a certain degree of apprehension on the way to the award-winning Oshawa Assembly Plant #2. It was unlike being reunited with an ex-girlfriend. I knew the good, but I was also reminded of the bad. I need not have worried. The ex-girlfriend has slimmed down, gone for a complete makeover and spent some quality time in the gym.

The new Grand Prix’s complete makeover is a success.

As much as we would like to see this beast with a manual transmission, for now, we have to settle with a 4-speed automatic with overdrive. Although our tester did not come with this option, for the first time Pontiac has introduced its own version of a manu-matic transmission call TAPshift. This Formula One-inspired technology is short for Touch Activated Power. Kudos to Pontiac for allowing TAPshift to hold the gear at redline for true sport’s car performance.

The engine in our 200 HP GT2 performed flawlessly. Although down on power compared to the 260 HP GTP, the engine proved to be very athletic with enough oomph to merge, pass and reach the upper velocities at will. For the adrenaline junkie, nothing but the GTP will do. However, the cost of admission is another $3,740 over the $30,735 Grand Prix GT2.

Take the GT2 to some twisties, and the improvements are readily apparent. Although the P225/60R16 all-season performance S-rated tires vocally object spirited cornering, the manner in which the GT2 corners is very predictable and reassuring. Even mid-corner expansion joints do not upset or unsettle the chassis. Very impressive for a 4-door midsize sedan.

Another Pontiac innovation found in both the GT2 and GTP is Magnasteer. The system varies the steering effort depending on speed. During low-speed maneuvers such as parking, the system compensates by providing more steering assistance. At higher velocities, the assistance is reduced to allow for more direct feedback from the road.

Although the previous generation Grand Prix exhibited capable breaking characteristics, Pontiac once again upped the ante in 2004. Grand Prix’s new anti-lock braking system features electronic brake force distribution. A Bosch controller automatically adjusts to different loads. More braking force is applied to the front when only the driver is in the car. When the cabin is filled with passengers or there’s a lot of weight in the trunk, the brake pressure is more evenly distributed between the front and rear. 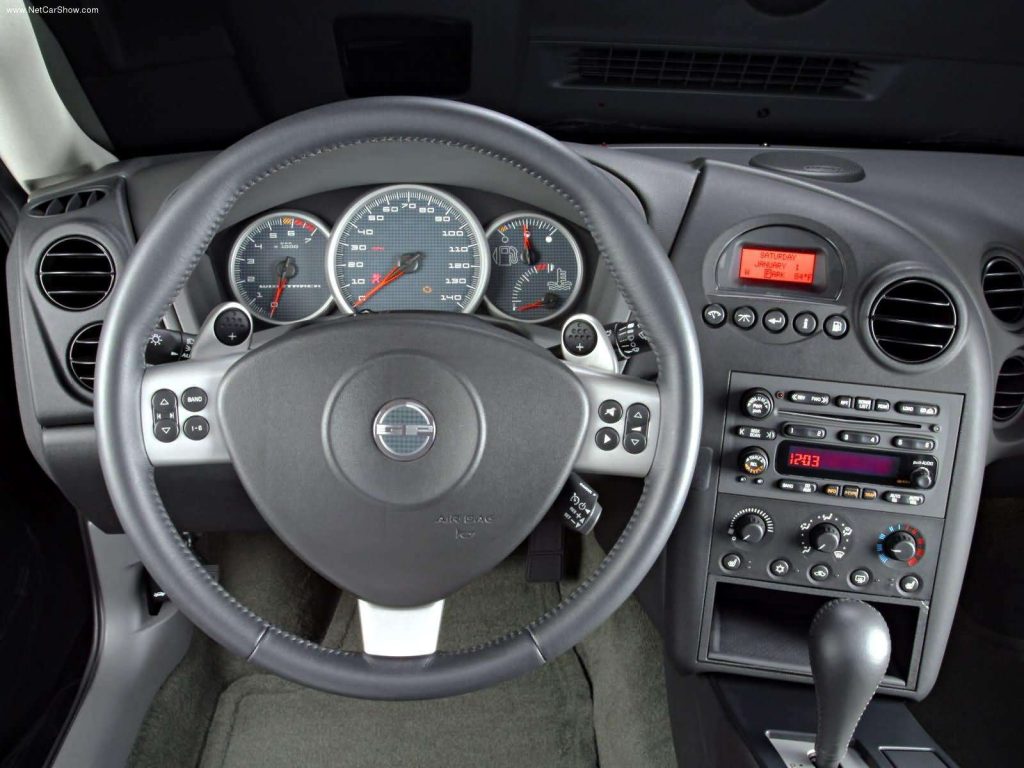 Let me make this perfectly clear. Although I feel the new interior design and function is far superior to the previous generation Grand Prix, I believe Pontiac still has a way to go before the quality of interior surfaces rivals that of its competitors. And that’s too bad because the aesthetics, function, and design are quite attractive. The new cockpit offers a driver friendly environment. The instruments are well laid out and easy to see. The stereo and climate control center is now angled towards the driver for ease of access and even the airbag filled steering wheel is nicely designed. The seats in our GT2 tester provided excellent support and were a definite asset on the long drives.

The engineers also spend a lot of quality time focusing on the little things. Things that make day to day living just a little easier. For instance, wider-opening rear doors, a large trunk pass-through and seats that nearly flat for added capacity. How about the front passenger’s seat that folds forward creating a convenient workspace with enough room for a laptop. As a matter of fact, the new layout is accommodating enough for a kayak or a surfboard up to 9ft in length… with the trunk closed.

For those who routinely load their trunks to full capacity (I’m thinking of all you sample carrying sales professionals), the trunk has also been redesigned with you in mind. No more gooseneck hinges, the new openers are now operated by gas struts and do not take up space inside the trunk. The opening is now wider and the liftover height lowered.

All in all, the interior changes are impressive and oh soooo close to perfect. I urge Pontiac to source the supplier of materials in the new Mazda 6. 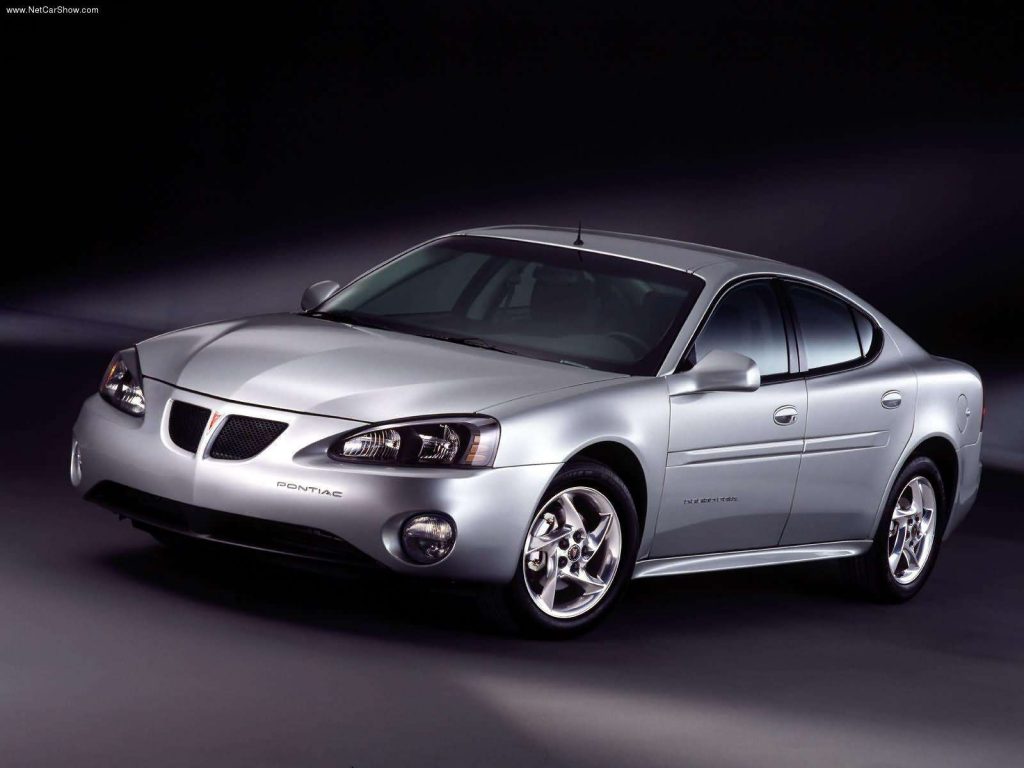 My first exposure to the 2004 Grand Prix was at the 2003 Detroit Auto Show. My colleagues and I debated about the new styling direction Pontiac took with the Grand Prix. By the third day of the show, there was a real split in the camp. We all welcomed the departure of body cladding and the bulbous plastic. The new clean lines define Pontiac’s entry into the modern design philosophy. We love the way the new body lines appear almost stretched over the widely placed wheels. It’s slick, it’s sexy and looks fast even standing still. Pontiac defines the look as a “look of intensity and purpose, made that much more distinctive by the fact its lines closely echo those of a coup”.

We tend to agree… with one exception. Both the front and the rear overhangs could be tighter to the wheels. The stretched out front and rear flanks clash with the trim and slender midsection. By reducing the scale and tightening the design Pontiac has the opportunity to compete with some of the sexiest modern designs on the market.

I was also hoping to see a new direction in rim style and design. I remember the torqued look dating back as far back as to some of the early Fiero’s and Grand Am’s. GT2 is an all-out re-design, why not carry the theme to the wheels as well?

Safety is usually an after-thought until we get into a compromising situation. Rest assured the new Grand Prix design team placed high priority on this very important component. The same rigid body structure responsible for the much-improved handling also provides a solid protective safety cage around the passenger compartment.

There is a full list of standard and optional passive, active and occupant protection features, including available head-curtain side airbags. Every new Grand Prix now features dual-stage frontal air bags that adjust the force of deployment based on the severity of impact.

The last link in the safety net is the available OnStar service. It’s a great peace of mind, if only to unlocked the doors when you’ve locked yourself out.

Pontiac’s target audience for the new Grand Prix is a 50/50-male/female split with the average age of 40. This demographic group demands a vehicle that offers the flexibility of four doors, is sporty in appearance and offers spirited performance. We are willing to bet the new Grand Prix will surprise a lot of people. Next time you drive past a Grand Prix owner… take a closer look. Bet you the occupant is smiling. The new Grand Prix is built for drivers!